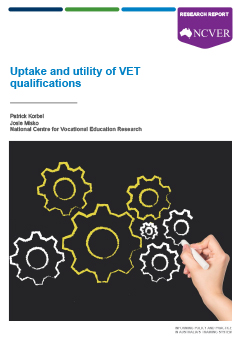 Uptake and utility of VET qualifications

Finally the report explores the number of qualifications that could be rationalised or consolidated, including identifying low and zero enrolment qualifications and models those which cover related occupational areas.

Training packages and accredited courses are the core training products of the nationally accredited vocational education and training (VET) system in Australia. Developed in consultation with industry, they define the units of competency, the qualifications and the guidelines against which competency performance can be assessed.

Review and reform of national training products has been actively pursued by training ministers through the Council of Australian Governments (COAG) Industry and Skills Council (CISC).

At the request of the National Training Product Reform Working Group, the National Centre for Vocational Education Research (NCVER) recently convened a symposium on training products reform. This symposium (held in September 2016) gathered a range of expert voices from across the sector to reflect on and provide suggestions for how the system could be improved. This research report complements the symposium discussions.

The research findings build on the picture of the Australian VET sector provided by the recent NCVER reports, Making sense of total VET activity: an initial market analysis (Anlezark & Foley 2016) and VET provider market structures: history, growth and change (Korbel & Misko 2016). Together, these three reports provide analysis of the national VET system, the diversity and growth of training providers, and the uptake and use of qualifications.

Nationally recognised vocational education and training (VET) in Australia is mainly constituted by enrolments in qualifications or skill sets, as defined in the various training products. Qualifications and skill sets themselves are comprised of units of competency, which are nationally agreed statements of the skills and knowledge required for effective performance in a particular job or function. Qualifications are aligned to the Australian Qualifications Framework (AQF) and are developed through nation-wide industry consultations.

The responsibility for ensuring that training products meet the skills needs of industry rests with the Australian Industry and Skills Committee (AISC), supported by advice from industry reference committees (IRCs) and development services provided by skills service organisations (SSOs).

This report contributes data and analyses in regard to these ongoing reforms. In the past, analyses of the uptake of qualifications could only use data on government-funded training activity, which did not provide a holistic view of the training occurring in the sector, especially the use of qualifications.

This research report focuses on the uptake and utility of enrolments in training package qualifications, as reported in Total VET students and courses 2015 (NCVER 2016). Access to total VET activity allows us to conduct a more comprehensive analysis, including government-funded and fee-for-service training activity.

This concentration of enrolments in relatively few qualifications and training packages reinforces the need for one of the agreed reforms arising from the Industry and Skills Council review; that is, to identify and remove obsolete and superfluous qualifications, with the aim of simplifying engagement with the training system.

However, it is important to note that low enrolments in qualifications and packages do not automatically imply obsolescence, although questions do arise:

Recently, research has also been published on the concept of broader qualifications, those with the potential to form streams or routes into related occupational areas, the argument being that such design allows extra flexibility and transitions between occupations and training. This has been examined in Australia by Wheelahan, Buchanan and Yu (2015) and has been flagged for implementation in the United Kingdom’s Post-16 Skills Plan (UK Department for Business, Innovation & Skills & Department for Education 2016). The idea is also reflected in the reforms agreed to by Ministers to ease transitions between occupations and to improve the efficiency of the training system by creating units that can be shared across industry sectors.

The example of the Certificate III in Individual Support was examined in particular because it demonstrates how three related occupations (providing aged care, disability and home or community support) can be packaged into one qualification with separate specialisations. Using our system, we identified 10 qualifications with 129 466 enrolments between them, in areas related to that certificate III over two training packages. Using the occupational classification as a guide, this concept could be applied to other areas and other qualifications.

The approaches discussed in this report to rationalise qualifications, by either removal or design incorporating greater cross-relationship by occupation groups, are models. Any application of these approaches would require widespread consultation with relevant stakeholders.

1 Training.gov.au is the National Register on vocational education and training in Australia.

An infographic exploring the uptake and utility of VET training package qualifications.

Using 2015 and 2016 data, this infographic examines the uptake and utility of training package quali… Show more

Using 2015 and 2016 data, this infographic examines the uptake and utility of training package qualifications in the Australian vocational education and training (VET) system. Show less